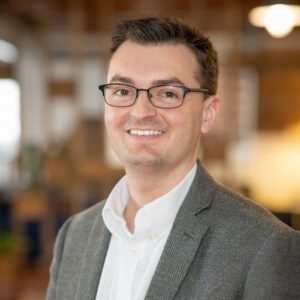 Derek Parry is a Vice President of Legal Product at SixFifty. He brings to SixFifty his passion for business, the law, and technology, and is spearheading the development of SixFifty’s Corporate & Commercial Docs as part of SixFifty’s legal product team.

Education and Experience
Derek graduated with his law degree from the J. Reuben Clark Law School at Brigham Young University where he was the Managing Editor of Publication of the BYU Law Review. Following law school, Derek clerked for the Hon. N. Randy Smith on the United States Court of Appeals for the Ninth Circuit.

After clerking, Derek entered private practice with a law firm in Salt Lake City, focusing his practice on private M&A corporate transactions, software licensing, and regulatory compliance for technology companies. He founded Code180.org, a live and online workshop helping non-technical professionals gain confidence in a world of technology by learning the fundamentals of web development and computer programming in three hours. Prior to joining SixFifty, Derek worked as General Counsel to an international bioplastics manufacturer where he facilitated multiple strategic acquisitions and managed the ongoing corporate governance, legal operations, and regulatory compliance of the company.

Get to Know Derek
Derek loves riding Onewheels, so much that he insisted we include multiple links to the Onewheel website so you too can learn to love riding Onewheels. In fact, the world championship Onewheel race is held in Utah, and Derek dreams of someday going to watch the race in person.

Derek is also a drummer. He plays in a 50s/60s cover band called The Malibu Revue where he can be seen performing Beach Boys covers and participating in dubious photoshopped productions.

TL;DR – Derek’s one true passion is the Onewheel.