With the rise of remote work, companies are hiring people in more places. This creates a tricky situation because each state has varying and complicated rules about what is allowed in employment contracts like non-competes, non-solicits, non-disclosures, and arbitration clauses. How can companies keep track of the laws in every single state where they have employees?

The following is a comparison between two solutions: SixFifty and a Rocket Lawyer review. Each offers hiring paperwork like offer letters and employment agreements. And each purports to account for the law in every state. But as you’ll see, SixFifty’s solution is more robust and provides much more protection for companies using the service. Rocket Lawyer’s tool can often be noncompliant with current laws and put employers at risk. 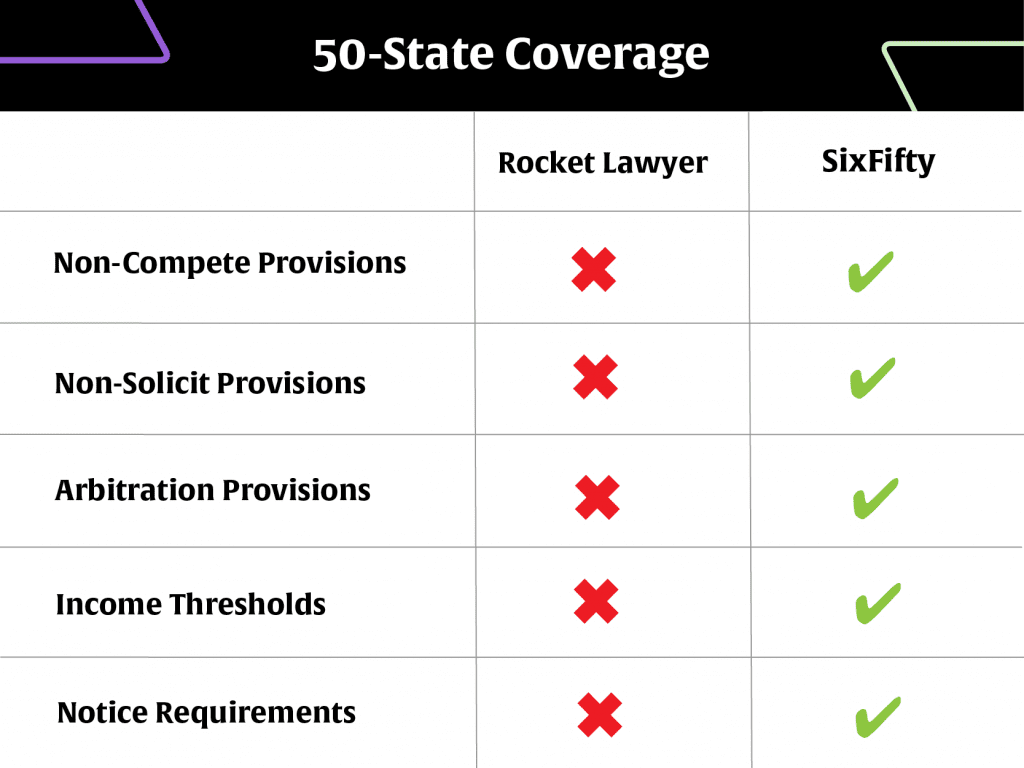 The biggest legal issue with employment agreements has to do with non-compete provisions. Non-compete provisions prevent a former employee from working with a competitor for a certain amount of time and in a certain geographic territory. Some states allow non-competes. Others don’t. In Washington, DC, companies can be fined for including non-competes, even if they never try to enforce them. On this point, SixFifty provides a vastly superior product.

SixFifty’s system asks users the same questions a lawyer would ask. Users select the state where the employee is located and SixFifty triggers a set of state-specific questions about non-competes and other issues.

If a user selects Oregon, for example, SixFifty’s product will ask five different follow-up questions about non-competes. These questions determine (1) whether a non-compete provision is allowed and (2) what the scope of the provision can be. If the employee makes under $100,533 dollars per year, for example, SixFifty’s system will not let you create a non-compete for that employee, per Oregon law. If the employee is not an executive, then the non-compete will be limited geographically to increase the probability that the provision will be enforceable.

For jurisdictions like California and Oklahoma, where non-competes are not allowed, SixFifty’s system does not give employers the option to include a non-compete provision, since that would be against the law.

SixFifty alerts users to these notice laws and builds language into the offer letter to ensure that the hiring paperwork is compliant. Overall, SixFifty’s coverage is essential and comprehensive.

Rocket Lawyer, on the other hand, allows users to include non-competes in any jurisdiction and for any length, regardless of whether non-competes are allowed in that location. Its tool provides no guidance on state-specific income thresholds or notice requirements—critical pieces of information needed to have an enforceable non-compete and avoid potentially steep penalties.

If you select California as the jurisdiction, for example, the Rocket Lawyer will ask if you want a non-compete, despite the fact that California does not allow non-competes in employment agreements. You are then free to add a non-compete of any length. Users are allowed to include non-competes for over 100 years if they like, which is against the law in every state by orders of magnitude.

Allowing users to select blatantly noncompliant options can not only invalidate the non-compete agreement and put the company’s confidential information at risk, but the company can also be fined or investigated by the authorities just for offering the agreement. For this reason, it is not recommended that users rely on Rocket Lawyer for employment agreements involving non-competes.

SixFifty includes non-solicit provisions only when the state allows it. 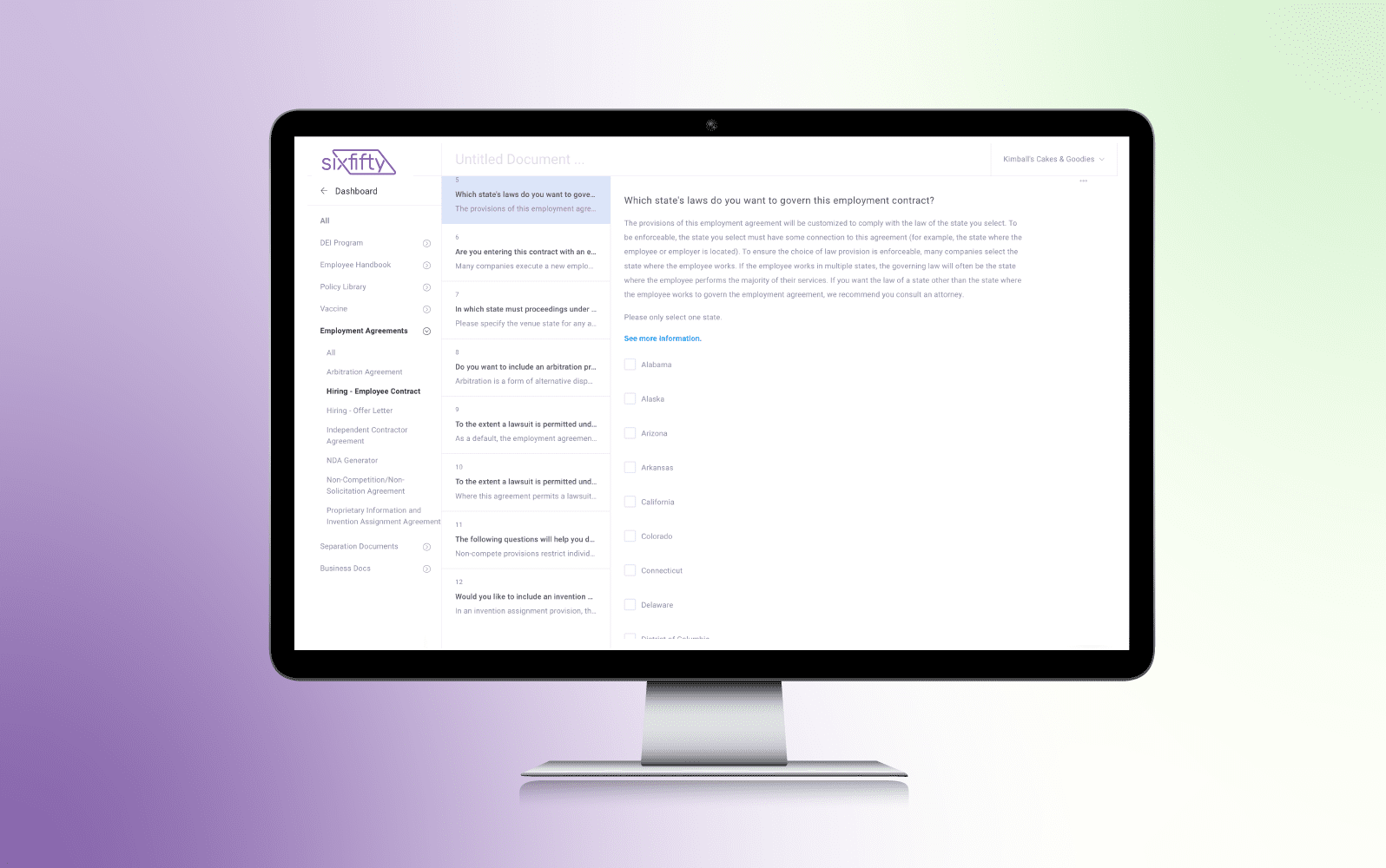 Create Employment Agreements for all 50 states

Rocket Laywer’s employment contract suffers the same problems with arbitration agreements and non-disclosures. Simply put, the product does not account for the law in all 50 states.

SixFifty’s Employment Agreement tool is based on the document that the legendary Silicon Valley law firm Wilson Sonsini uses for its clients. It’s widely regarded as the industry standard employment agreement for technology companies. SixFifty expanded that agreement to account for all 50 states and had a second employment law firm review it.

The result is the best 50-state employment agreement on the market. Schedule a demo today!